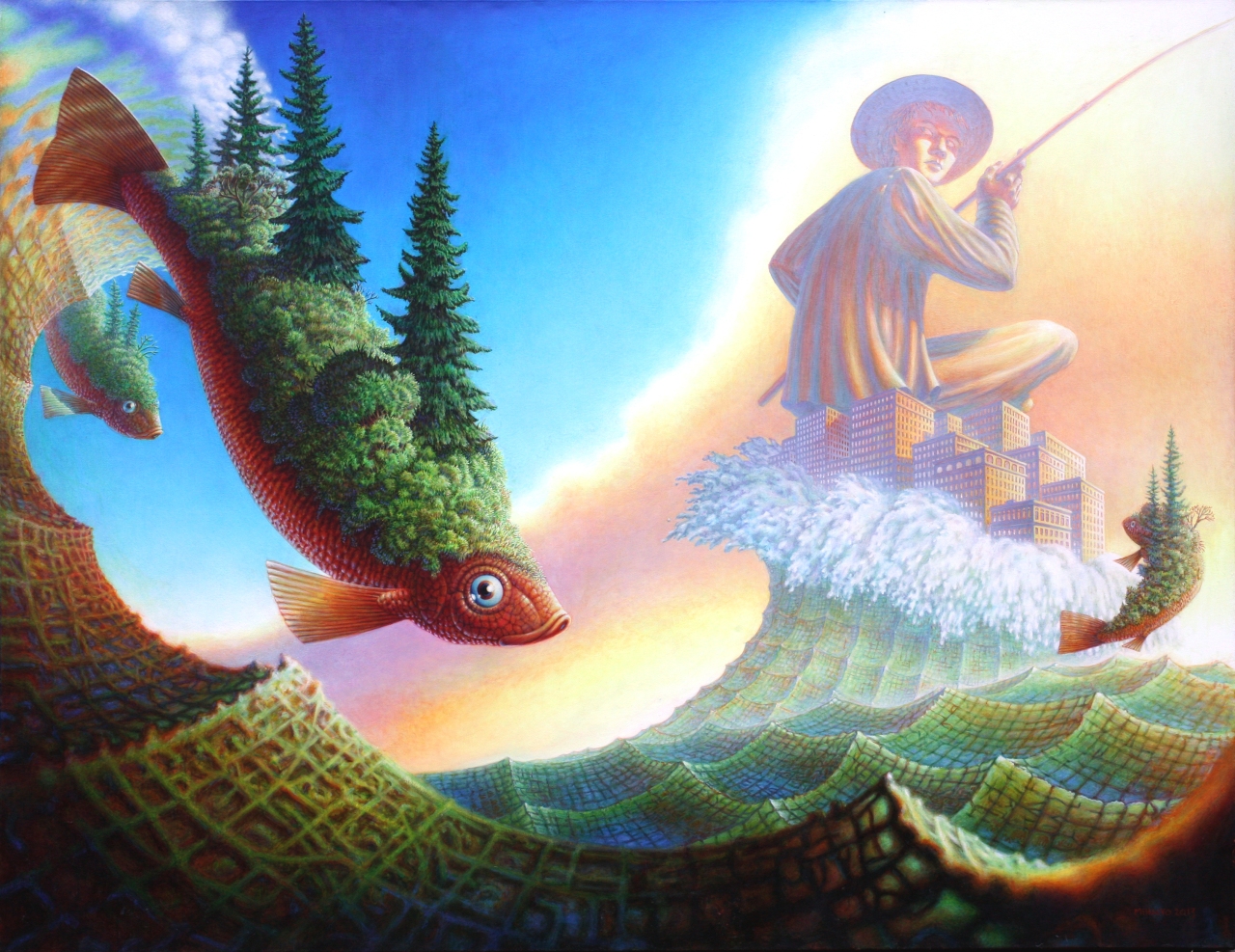 Written Exclusively For and Published By WEAVE Magazine – Volume 3, May 2015

A glimpse into Jeff Mihalyo’s home studio, and I instantly know how he gets through a Seattle winter. Canvases line the walls, tall as the tip of your nose, and each radiates jewelled light strong enough to dazzle. Suffused in cerulean, tinted by pink, and bombarded by umber, I wonder: can you get a tan from looking at a painting?

Mihalyo has long been a fixture of the Seattle art scene. His surrealist oil paintings often garner comparisons to Magritte and Dali, with their fantastical settings, distorted perspectives, and hazy horizons.

Physics turn strange in a Mihalyo painting: buildings can float or balance on a fingertip; animals grow massive or shrink to a pinpoint; and the very earth twists itself to accommodate an architect’s whim. In his newer works—most large as a window or a doorway, the better to swallow a viewer and transport them—the perspectives are so dramatically skewed that they almost induce vertigo. In front of one you’re a miniscule speck in the trough of a wave; before another you’re at the foot of a crashing waterfall, peering up at a city perched precarious in its maw.

Rendered in a quite un-Seattle palette of tropical blues, glowing greens and burnt yellows, the works stem from a combination of Mihalyo’s imagination and his world travels. Fragments of iconic architecture ground the scenes in this world—as far as floating buildings can be grounded—and hints of the Doge’s Palace in Venice, Roman aqueducts and coliseums, and Mont San Michel make the works seem like illustrations from a lost Marco Polo travelogue.

“For years, I had a great cycle,’ says Mihalyo. “I traveled for a few months, I came home, I painted a show, sold it, paid the bills, and then went off traveling again.”

Although the 2008 recession put the brakes on the cycle, his past travels still appear in his work in the form of Japanese gates, Grecian columns, and Mayan temples.

Those brilliant, crystalline colors—perhaps a lasting legacy of going to art school in LA—come from Mihalyo’s careful application of transparent layers onto white canvas. Using evaporated turpentine, linseed oil and extremely translucent layers of oil paint, he—like the 16th century Flemish painters who developed the technique—allows light to travel down to the surface of the canvas and rebound.

“I’ve bastardized the technique, making it produce these candy colors. What would the masters think?” 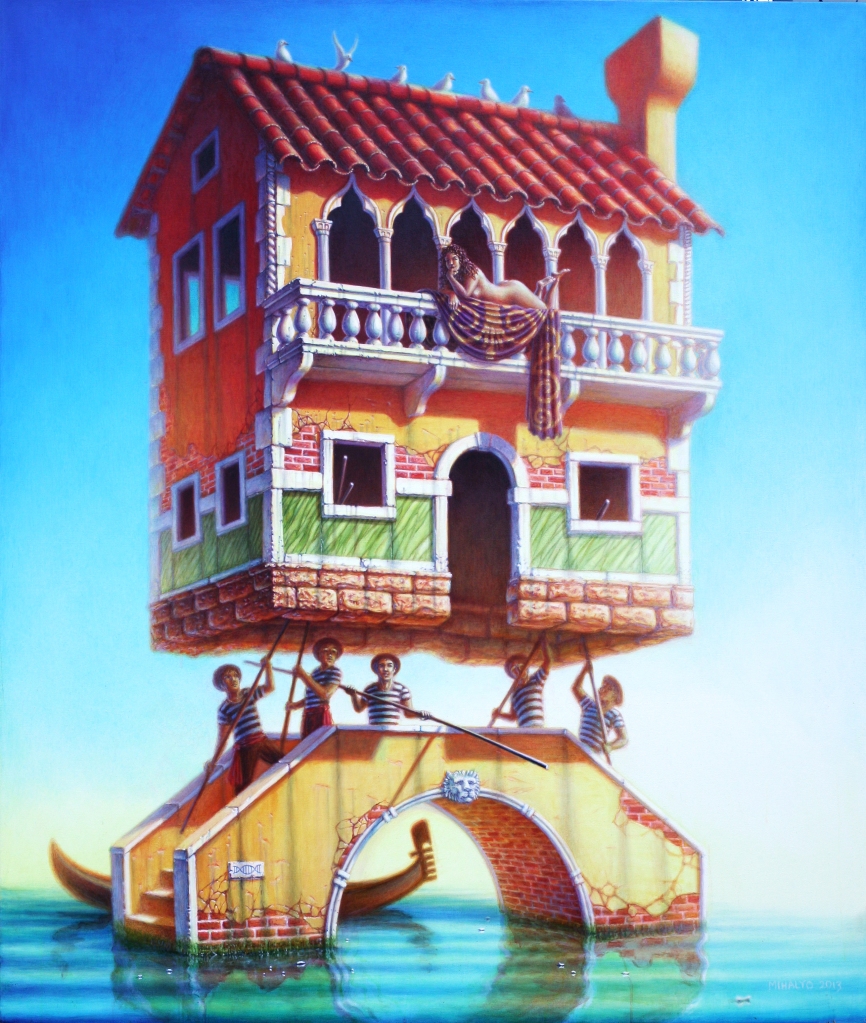 Before he puts paint to canvas, he plans every detail of the imagery. He shows me the piles of black sketchbooks under his worktable, and we page through daily sketches.

“If you’re a real artist you should be providing something. I’m trying to provide truth. Whose truth, I don’t know! But truth of a sort. I’m interested in big ideas. I’m using figures and architecture to talk about other things, to send coded messages.”

He points out a neatly hidden symbol in “Suitors”: a double helix painted onto on the brick bridge. What’s it doing there? At first glance, it looks like the men are propping up a house floating above them where the woman perches. But, look closer: they aren’t propping, they’re breaching.

“You know the story of how Odysseus’ wife Penelope was left alone for years, with all these other men trying to court her? Well, these are men, but they’re also symbolic of something else…”

He trails off, and I begin to put it all together.

“I’m not trying to connote cheesy emotionalism. No button pushing, no sentimentality. I could—I could make dumb romance cover art.

I’m frustrated when people immediately ask what it means. I want them to discover it, because I won’t always be here to explain it to you. The best thing in the world is for someone to call me up ten years after buying a painting and say, “oh my god, I just noticed this one little piece!” 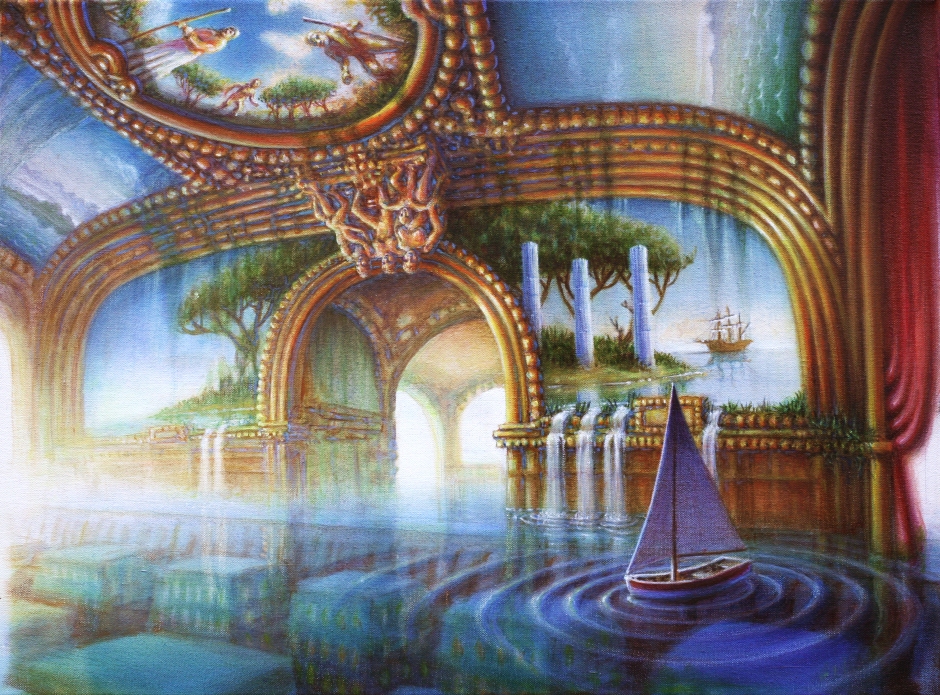 Something in the back of my brain gets tickled by Mihalyo’s work, some element of the sweeping sky or the colors that reads as deeply familiar. I couldn’t put my finger on it, until Mihalyo mentioned that he spent much of the 1990s working for Microsoft, Disney, and Dreamworks doing art and animation for edutainment cd-roms. I must have absorbed some of Mihalyo’s handiwork on those same cd-roms, spending hours playing them on our first family computer as a kid in the 90s.

Even now, there is something of the spirit of those early home computer days in Mihalyo’s work. The horizonless vistas sweeping forever, the electric colors, the beings that are perfectly comfortable unmoored from the ground: they encapsulate the optimism, the promise of exploration and transformation that computers represented in those heady days. The digital world seemed unbounded and unknowable, like it could hold any number of worlds and words and people and ideas—especially those depicted in Mihalyo’s dreamscapes.

While the rest of us were still figuring out that computers didn’t need to be room-sized, Mihalyo was already working for Microsoft, and looking towards the looming shadow on the horizon: the internet. As the resident “computer-knower” in the 80s and 90s, he was also designing fliers for the OK Hotel, the venerable subterranean Pioneer Square bar and music venue, and watching the music scene evolve right before his eyes.

During that time, he painted a massive mural that incorporates the OK Hotel’s most important founders, collaborators and visitors. It adorned the bar up until the venue was shut down by the Nisqually earthquake in 2001. Today, the piece lives in his home, but he hopes it can find a home at a local museum, like the EMP or MOHAI. Here’s hoping: it’s a resonant time capsule of Seattle’s 1980s-90s music scene, and beautifully rendered in a style reminiscent of Diego Rivera’s DIA murals.

“I wasn’t here for the whole 1980s Seattle renaissance,’ Mihalyo says regretfully. “I was in art school in LA for a lot of it. I missed the rise of Fantagraphics. I missed the moment before all these little underground bands went national. Today, I sometimes feel like packing up and moving somewhere else, but there’s another renaissance happening here and I don’t want to miss it again.”

There’s frustration in his voice when he talks about Seattle, mixed with love:

“I’ve been here most of my life, I’ve paid my dues. I’d hope that Seattle one day claims me as its own. Will I be known as one of my generation’s Northwest Masters? I don’t know, but I’d hope so.” 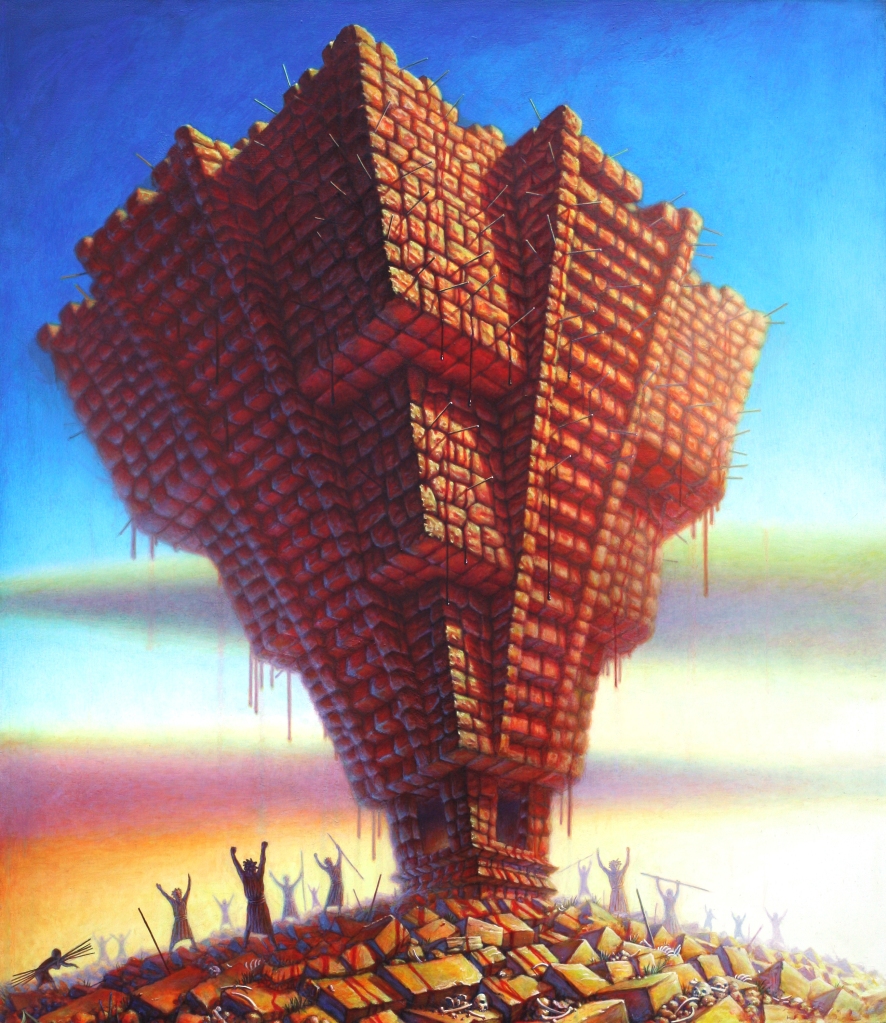 Sitting in the glow of the canvases, I realize that in almost every work the viewer is at the foot of some higher, larger thing. He has positioned the perspective low, as we crane our necks to see some grand, unfolding thing in the sky above us, far out of reach.

I ask Mihalyo about the symbolism here—are these koans about balance, or about learning to let go?

“Not quite. It’s interesting you see them that way.”

The floating motif crept in as the world he’d built crumbled around him: a long divorce and the sudden loss of his wife; the upheaval of moving from a large studio; the disappearance of friends and money.

“I became unmoored. I started to dissolve. I didn’t know who I was and had almost no one to talk to with a similar experience.”

By 2004 he began to reconnect with who he was without his wife, on his own. Those unreachable vistas in the sky began coming a little closer to land, seemed attainable.

The hovering chunks of mortar and stone are empty, worn, and solitary– a testament to the place where Mihalyo once found himself. But though they are empty they are certainly habitable; though they are worn they are restorable; and while they are alone in the air, there are always figures in the scene who are yearning towards them.

So, perhaps they are also indicative of what Mihalyo sees for his future.

Jeff Mihalyo’s works will next be seen at AXIS Gallery in May 2015.

All images featured are by and copyright of Jeff Mihalyo.